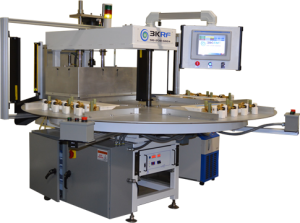 3KRF a division of MarkPeri is proud to show its engineering capabilities with this state of the art Double Cycle Medical Turntable. This machine was developed to deliver many years of reliable production and control product quality to the best in the industry.

You’re probably familiar with the plastic intravenous (IV) fluid bags used by healthcare professionals to collect bodily fluid samples from patients. These bags are equipped with tubes that allow the fluids to flow into the bag. The tubes must be sealed tightly into the bags to ensure leakage does not occur during fluid transport and after fluid collection.

The Fundamentals of RF Sealing

RF sealing technology relies on the generation of heat through the production of radio frequency waves, a process that is similar to how a microwave oven operates. In the case of RF sealing, a radio transmitter, also referred to as an RF generator, and an air-operated press work in tandem to create the seal. The upper die of the press is lowered against the plastic material that is resting on the lower die nest, producing a squeezing action the closes the path. The RF generator then creates energy that flows through the path and heats the seal area. Upon completion of the sealing action, the seal is allowed to cool under pressure. After cooling, the press opens and releases the sealed product.

In the case of medical IV bags containing tubes, a variation of the RF sealing process known as double cycle sealing is often the most effective method. Using a specially designed double cycle machine, RF sealing is accomplished through the implementation of two separate seal cycles. During the first cycle, the RF energy is applied to a mandrel (spindle) located inside the tube and between the two sheets of plastic film. The double cycle radio frequency equipment includes two grounded semi-circle-shaped dies to ensure an even seal the whole way around the tube. During the second cycle, the press remains in the closed position. The RF is connected to the upper die while the lower die remains grounded to allow the execution of bar and perimeter sealing. Turntable-based systems called double cycle TTBL machines are typically used for double cycle RF sealing. These machines may accommodate as many as eight sealing stations to maximize productivity. Fully automated double cycle radio frequency equipment is also available. Through the implementation of robotics, these systems eliminate the need for operator intervention, which can significantly reduce labor costs.

MarkPeri has made some of the most reliable double cycle RF machines in the industry. The small footprint generator combined with the stepper motor controlled double cycle switch has had customers throughout the world running trouble free for years of operation. We offer the double cycle machine up to 10KW to fit most medical applications. Our product inventory also includes high-quality used and expertly reconditioned double cycle radio frequency equipment that provides exceptional value to companies seeking to minimize costs. We can furnish your company with a completely restored double cycle TTBL machine that can handle your most demanding applications.

MarkPeri has been providing industry-best RF sealing equipment solutions since 1982. You can trust us to recommend the best product for your needs and budget. Contact us to learn more about your double cycle TTBL machine options today.