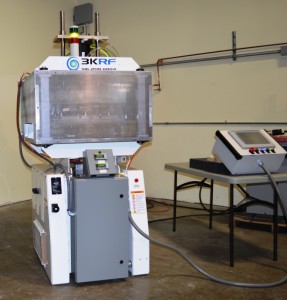 We at MarkPeri utilize our plastic sealing experience to deliver the best technology for your sealing needs. We have built many different pieces of equipment to handle applications: large and small.

You can also trust our decades of expertise to help you choose the best heat sealing machine for your needs and budget. In addition to brand-new and custom-designed heat sealing machines, we also offer top-quality used RF sealing equipment for sale. Used RF sealing equipment can deliver superior sealing results at a lower cost than new machinery, making it a viable alternative for any company looking for ways to minimize their equipment costs.

MarkPeri offers a wide range of options for sealing machines to meet your diverse requirements, including radio frequency selaers. We’ll help assess your needs based on the type of product being produced, quantity of units and operating budget to identify the most effective solution. We carry a broad selection of standard sealing machines and can also custom design equipment for your specific application and work environment. Give us a call to help you solve your plastic sealing needs.

During the heat sealing process, the heat sealing die is lowered to the platen that holds the material. The die is then energized via the application of heat. The combination of heat and the downward pressure of the die create a seal in the desired shape. Upon completion of the seal, which generally takes a few seconds, the die is raised to its original position and the sealed material can be removed from the heat sealing machine.

Heat sealing machines are available in various configurations that enable you to customize the process. Examples include:

The RF waves energize the polar molecules that are in certain types of plastic, which serves the function of heating the plastic and forming the weld. Just as when heating food in a microwave oven (which also heats via molecular action), RF heating sealing can weld plastic sheets together more quickly than conventional heat sealing. The welded product also cools more quickly upon removal from the machine.

Radio frequency heat sealer equipment also includes a buffer that is placed underneath the material. The buffer prevents the RF waves from penetrating the plastic as it becomes thinner during heating. It also ensures the proper balance between sticking and releasing, provides a soft landing spot for the sealing die and cushions the plastic.